You are here: Home1 / About Museum 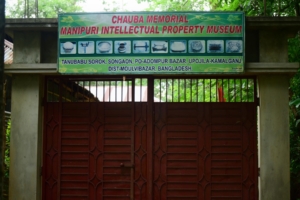 Among the environment of ethnic and cultural diversity, a unique and natural charming Manipuri village of Songaon (Hamom Khul), is home to a one- of- its-kind called the ”Chauba Memorial Manipuri Intellectual Property Museum“. This museum is dedicated to Hamom Chauba, paying tribute to his contribution towards the social life of Meetei or Manipuri community. It is a museum of Traditional Cultural Expressions (TCEs) of Manipuri community in Bangladesh. The museum of this kind is the first and only one museum in Bangladesh and abroad. The objective of the museum is to protect intellectual properties rights of Manipuri community.

The idea of such a museum was originated from the preparation of a seminar paper on identification, valuation and intellectual property protection of traditional cultural expressions of Bangladesh which was held in the Bangladesh Writers Club seminar room on 6th and 7th January 2006 in Dhaka. It was organized by “Lokbangla” in cooperation with World Intellectual Property Organization (WIPO). The first National seminar on this category, the organizer of the seminar Mr. Mohammad Nurul Huda asked to present a seminar paper on TCEs of Manipuri community. While preparing the paper it realized the necessity of preserving existing and endangering TCEs of Manipuri community and to focus real identity of Manipuri Community. It was also noted with regret that, present generation are misusing and misappropriating the intellectual property rights of all TCEs of Manipuri community by greedy businessman and the other persons to serve their own interest at home and abroad. To avoid such a mischievous attitude and serious threat to our identity, have decided to establish a museum of this kind and to construct a semi pucca building within the family campus of the founder of the museum for displaying the collected TCEs. On 28th December 2005, the founder started to collect TCEs of Manipuri community drifting among the Meetei inhabitant areas in Bangladesh and named the museum as “Chauba Memorial Manipuri Intellectual Property Museum”.

On 1st. October 2006, eminent poet Dilwar laid the foundation stone of the museum. Renown poet Sahid Sagnik, writer Ahmed Siraj, freedom fighter of Bangladesh Konthasiram Abdul Hamid and media personality Shabbir Alahi were also present in the occasion as a guest of Honour. Reputed meetei poet Sonaton Hamom conducted the programme and social activist Hamom Gopal was in the chair. With great enthusiasm the founder completed a small semi pucca building even though facing many financial difficulties. After completing the house, collected TCEs were displayed in the museum.

In the next year, on 12th May 2007, the museum was inaugurated by well-known poet of Bangladesh Mohammad Nurul Huda, consultant of WIPO, Bangladesh. Professor Swapan Nath, Writer Ahmed Siraj, Artists Ashraf Jaman, Headmaster Sajbam Abdul Motin were also present in the inauguration function as a guest of honor. Principal Dr. Aribam Badrunnesa Choudhury conducted the program and the founder of the museum H. Tanubabu Singha alias Hamom Tanu Babu was in the chair. In the inaugural speech, Mr. Huda expressed his contentment to materialize such a model of “Community Museum” which he has proposed in the draft study on the TCEs of Bangladesh undertaken in cooperation with WIPO. He also opined that this kind of museum is unique and only one in Bangladesh and abroad. Many tourists from different countries of the world such as Australia, Japan, Canada, German, USA, England, Sweden, Switzerland and India visited the museum. Students and professors from Universities and Collages of Bangladesh visited the museum for their research works.

The museum consists of Tangible and Intangible items. Intangible  items such as Audio, VDO, CD, DVD of cultural ritual ceremonies and festivals as well as numerous and various tangible items of bamboo crafts, wooden crafts, handloom and handicrafts, metal crafts, stone crafts, paintings, basketries, ornaments, historical and religious icons are displaying in the museum. From the beginning the museum has been providing the visitor mini cultural show in a mini open-air theatre which attached to the museum according to visitor’s prior request. Present mini theatre is not convenient in the rainy season and not suitable to execute seminar or symposium which related with the museum and the museum also needed mini auditorium to fulfill mandatory and visitor’s satisfaction. So far the museum has extended three more galleries but require more space to manage stack artifacts. For the fulfilment of visitors and for elaboration of the museum it is essential to enhance more fund.

Authority of the museum sincerely expressed warm gratitude towards the donors encouraging to preserve by giving their valuable TCEs (Tangible and Intangible) of Manipuri community and would like to appreciate to those persons who support and assist to bringing up to the present stage of the Museum.